A church’s fresco project shows that everyone has sacred worth 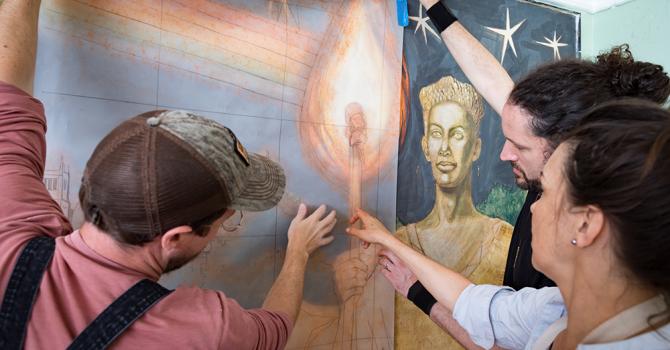 Artists Caleb Clark, Christopher Holt and Jill Hooper compare a tracing of preliminary drawings to the final composition of the fresco at Haywood Street Congregation. Holt is an artist trained in making frescoes; Clark and Hooper assisted him in the two-year-long project. Photos by John Warner/Warner Photography

A church dedicated to radical hospitality and welcome creates a fresco that permanently enshrines those values and the faces of those it serves.

In the fall of 2018, Haywood Street Congregation, an urban church serving the homeless, poor and marginalized in Asheville, North Carolina, put out an unusual call on social media: “Send us your horse hair. Any horse hair, not just mane or tail.”
The request stemmed from the fact that horsehair is a key ingredient in the specialized plaster used in creating frescoes -- and a major fresco project was underway in the Haywood Street sanctuary.

The horses around Asheville would be contributing their locks to a project conceived by artist Christopher Holt and the congregation’s pastor, the Rev. Brian Combs.

It is intended to illustrate the church’s vision for inclusive community and “offer a timeless witness to the gospel, in plaster and pigment, where the last are finally made first,” Combs said.

“I think of it as a love letter, a postcard to our future selves,” he said. “When the sweep of our short lives is gone, this work of beauty reflecting the essence of human experience will still be here, still declaring what Haywood believes -- that everyone has sacred worth.”

Ancient practices and a fresh vision

Fresco painting is an ancient method of creating enduring murals, such as those found on the walls of Pompeii and the walls and ceiling of the Sistine Chapel.

The laborious, time-intensive technique of fresco, popular during the Italian Renaissance, is unique in that the pigment is applied to a layer of fresh, wet plaster, becoming permanently integrated with the underlying structure as the plaster dries.

Why was the choice to create a fresco significant? What does this art form’s permanence mean?

“There’s a living quality to a fresco; it has a soul about it -- the holding of time itself. A fresco never grows darker; as it ages, it grows more luminous,” Holt said.

After the call for horsehair, Holt and his fresco team began by creating sketches of the people -- members of the congregation’s ministry community -- who would be pictured in the 27-by-10-foot composition covering the entire front wall of the sanctuary.

Often, the models would sit for their sketches while waiting for their seating at the church’s free, “come one, come all” weekly lunch, the Downtown Welcome Table. 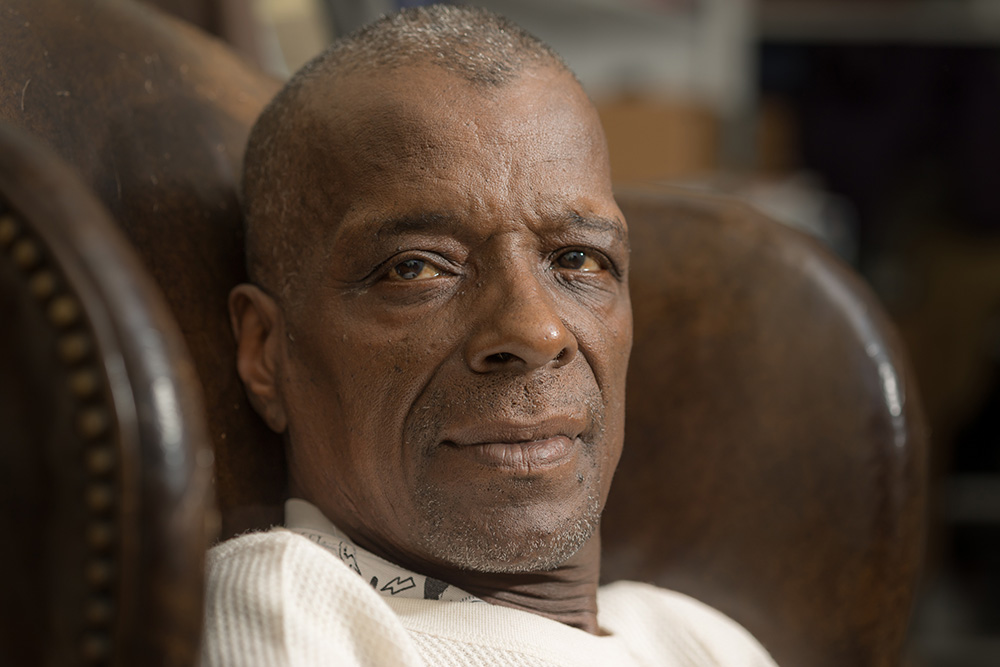 Blue, a Haywood Street friend, or member of the community, sits for a preliminary sketch.

This signature ministry of the urban church is not a typical soup kitchen. Often prepared by Asheville’s top culinary stars, the Welcome Table lunch is a multicourse meal served on linen-covered tables set with china, cloth napkins and fresh flowers, a lavish offering signaling that all deserve dignity.

Together, the Welcome Table and the Haywood Street Fresco fill empty stomachs and feed hungry souls with relationships, beauty and a sense of sacred worth.

How does this story illustrate Leadership Education’s concept of traditioned innovation?

The first sketch was of Charles Burns, pictured prominently as a torchbearer in the top left of the finished mural.

“Charlie was a pivotal, founding member of this community. He stripped down the barriers between folks on the street and Haywood’s ministry, and he believed in this fresco project,” Holt said.

Burns didn’t live to see it completed, but his chiseled, cancer-weary face looks proudly out from the fresco.

“As long as that wall stands, I’m going to be at every service," Burns said in a video interview weeks before his death. "There’s no other place on earth I would rather have my picture hanging than Haywood Street."

Robert Stafford is the church’s beloved gardener and a board member. He’s also in the fresco, pictured holding three sunflowers, his bright, clear eyes peering out beneath his signature hat.

“I’m honored. To be immortalized on that wall forever is pretty neat,” said Stafford, who is formerly incarcerated and is open about his struggles with addiction. “Everybody in that picture has a story to tell.”

Blessed are the poor

Telling these stories is exactly what Holt had in mind when he and Combs first began dreaming of such a project in early 2014. Holt, a classically trained artist who studied and apprenticed with Asheville-based fresco master Ben F. Long IV, is a friend of Combs’ and a frequent visitor to Haywood Street’s worship services. 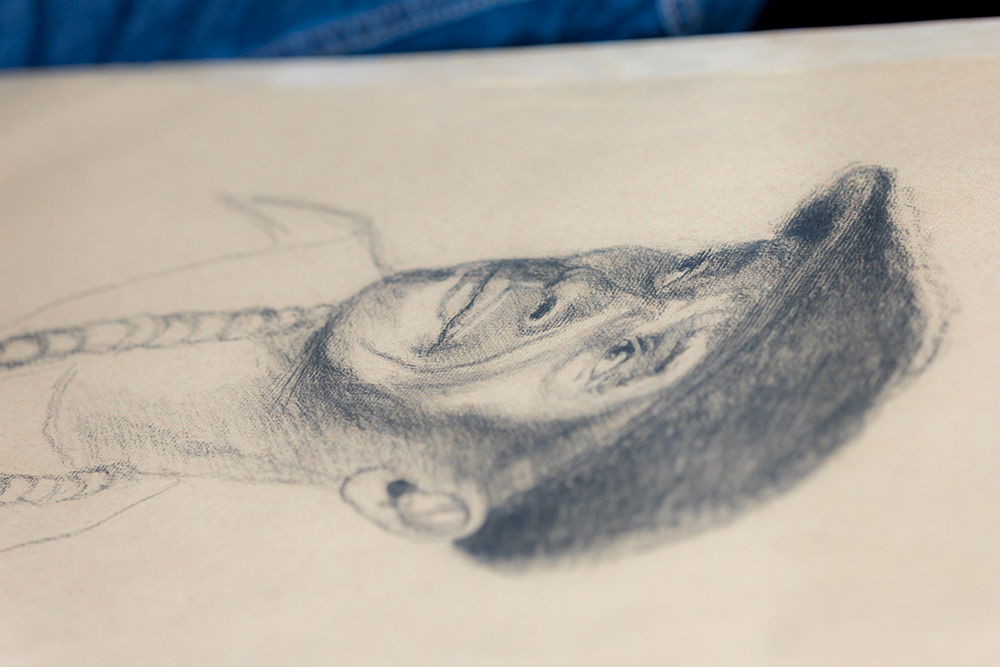 The front of the sanctuary was a large rectangular green wall -- a blank slate. Having worked on Long’s frescos in other small chapels, Holt saw the potential. Even more, he and Combs recognized an opportunity to create something unique, and uniquely reflective of Haywood Street’s mission.

Rather than depicting biblical scenes and characters, as classical frescos typically do, this fresco would feature members of Haywood’s community.

Inspired by the Beatitudes, it would illustrate the church’s foundational belief that blessed are the poor, blessed are the lowly. The homeless often feel invisible to society, yet “what is most sacred is often most overlooked,” Combs said.

The medium is the message

It was a monumental and expensive undertaking -- the antithesis of the modern inclination toward quick and cheap -- and required a team of highly skilled artists. Holt and Combs first presented a proposal to the church board in 2014, estimating that the project might cost $150,000.

“The expense was the main retort we heard. Detractors called it wasteful. No utilitarian value, no measurable outcome. But that was exactly why I wanted to do it. Acts of ministry almost never show up on a ledger. Grace is immeasurable; that’s why it’s profound,” Combs said.

He noted that Jesus allowed a woman to wash his feet with costly oil: “He was constantly trespassing boundaries of expediency and efficiency.”

And while the fresco itself might not directly help someone struggling with substance abuse or put a roof over someone’s head, Combs and Holt argued that it would draw visitors and art enthusiasts from Asheville’s growing tourism base into the sanctuary and help spread the Haywood Street story.

“To show, through art, ‘This is how we treat every human being,’” Combs said.

How might the arts provide a means for your congregation to honor what you care about?

In addition to being “a gateway for positive growth for Haywood Street Church,” the fresco would amplify the sanctuary as a healing, inviting space, Holt said. “We need more places in the public sphere where people can retreat and reflect.”

In the end, the church board approved the project and a fresco committee ended up raising more than $300,000, largely through informal house parties and a community concert. This amount includes funding for future maintenance, programming and a docent.

During the summer of 2018, Holt refined the conceptual composition -- a rendering of a mountain backdrop with community members lifting up the Welcome Table.

By November, the church wall was reinforced with steel and the fresco frame went up. A substrate mix of the donated horsehair – about a pound of it – as well as plaster and lime was applied according to age-old techniques -- the same process used in the early 1500s for the Sistine Chapel.

This application had to dry and cure for six months before the actual painting could begin, during which time Holt and his team sketched the models.

Watching Holt draw is like seeing “an act of pastoral care,” Combs said. “He treats everyone as a subject, not an object. You can’t not be present with someone when they are sitting for you. He embodies Haywood’s mission -- relationships above all else.”

It’s also an act of hospitality, Holt said. “We sketched during the winter, so I invited them in from the cold, offered food, made them comfortable. I’d play whatever music they wanted. For Jimmy, I was blasting Ozzy Osbourne; for Popeye, it was the Stones.” 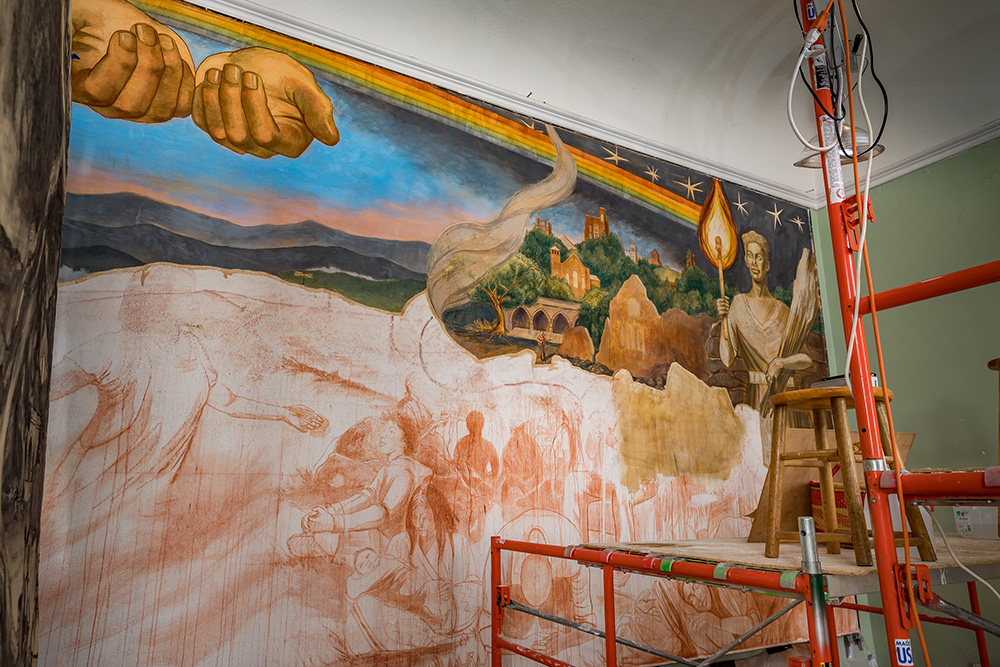 The fresco in progress. The top is completed while the bottom half still is in sinopia, which is an earth pigment used to create the underdrawing that forms a guide to the final painting.

When the artists were working in the sanctuary, anyone was welcome to come in and watch -- or sleep in the pews.

One woman would regularly stop by. She’d ask to just sit and look.

Art for the people

In early October 2019, Holt added the final brushstrokes to complete the nearly two-year project. The scaffolding came down, and the jumble of dropcloths and buckets at the front of the sanctuary was cleared away.

The Rev. Brian Combs recognized that “people are desperate for beauty.” What does that look like in your context?

A formal blessing and celebration of the Haywood Street Fresco will take place Nov. 13-14, 2019, but there are already regular docent-led viewing hours each week.

“Time and again, I’ve watched Haywood Street create a space for people to become their most pure, authentic version of themselves,” Holt said. “This opportunity, to create art in a space so laden with meaning, has done that for me. That others are finding joy and beauty, happiness and sadness in this fresco is all I need.”

For Combs, and for fresco team member Hooper, the fact that it is truly art for everyone is central to the fresco’s impact -- and a special honor for those whose images are part of the finished work.

“Now they’ll forever be part of this painting that will be viewed by generations long past our lifetimes,” Hooper said.

Stephanie Hunt is a freelance writer based in Charleston, South Carolina. She has a B.A. from Duke University and an M.T.S. from Vanderbilt Divinity School. She is a contributing editor for Charleston Magazine, and has been published in a range of national and regional publications, including The Chicago Tribune, The Christian Science Monitor, Coastal Living and Poets & Writers.