Those with severe mental health issues are often misunderstood by people of faith, but churches have a responsibility to listen to and see each person as a person, says a professor and author.

In the pandemic, churches may find that more and more congregants are struggling with mental health issues, but Christians haven’t always been the best at talking about mental health.

In his most recent book, “Finding Jesus in the Storm: The Spiritual Lives of Christians with Mental Health Challenges,” John Swinton pushes for Christians to be more careful with their language around mental health, to push past stigma and to actually listen to people with mental health issues.

“The spiritual lives of people living with mental health issues can be constructive and positive and aren’t simply the product of pathology,” Swinton says.

When we focus on diagnoses or harmful cultural stereotypes of mental health issues, then we overlook the humanity of those with mental health challenges.

Instead, if we listen to their actual experiences, then our theology might be challenged and developed even as mental health issues multiply in congregations because of the pandemic.

Swinton is the chair in divinity and religious studies at the University of Aberdeen and a registered nurse who specializes in mental health.

He spoke with Faith & Leadership’s Chris Karnadi about his book, how to improve language around mental health in church contexts, and the particular mental health struggles that have emerged in the pandemic. 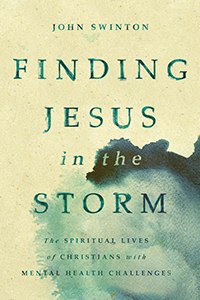 Faith & Leadership: You interviewed Christians with severe mental health challenges in the research for this book. What did you learn?

John Swinton: Almost everybody that participated in the study was Christian, and it’s a study of how Christians engage their faith in the context of severe mental health challenges.

The first thing that I noticed was the difference between the stories that people told me about their experience of schizophrenia, bipolar disorder or depression, which are the three conditions I focus on, and the psychiatric diagnosis sense of things.

This isn’t in any sense anti-psychiatry — quite the opposite. Psychiatry is very, very important, but it just pointed to the fact that most people don’t live in a professional context and there are other stories and other descriptions that need to be thought through beyond a diagnosis.

There was a tension between the standard way that many of us in culture assume these severe mental health issues to be and the way that people described their experiences.

The second thing is a difference between symptoms and experiences. If we talk about something like schizophrenia, for example, which is a culturally highly stigmatized condition, we think about hallucinations and voices. But the way in which we normally frame mental health experiences in terms of symptoms just doesn’t seem to me to resonate with the kinds of experiences that people have.

People go through really difficult experiences. People hear voices, and it’s horrible, and the delusions that people have are terrible, so I’m not in any sense minimizing that. However, for some people, they can live quite well with voices, and so therefore the challenge is not so much to eliminate the voices as to help people actually manage them, and then the elimination dimension comes in if people are caused great distress.

F&L: What are some of the struggles that people had specifically with the relationship between mental health and faith?

JS: Religious or Christian communities can play an ambiguous role in the lives of people with severe mental health challenges, particularly via the language and explanation that they give to people.

Almost everybody that I spoke to — and I spoke to over 80 in total — said to me that they’d had an experience where a Christian or a Christian community had told them that their situation was a result of either a sin or the demonic, and that was deeply distressful.

Another thing was a deep feeling of alienation and abandonment by God that can be experienced particularly by people with enduring depression. People find the feeling really difficult in terms of their faith life, and you can understand exactly why. They feel that they’re abandoned by God and that they’re bad Christians or that they’re no longer inside the tradition as they understand it.

One of the things that struck me in the interviews for the book and then the process of theological reflection afterward is that actually the absence of God is something that runs all the way through the Old and New Testaments. God constantly disappears.

But that’s not necessarily the case. It may be that we simply no longer have the spiritual resources to deal with God’s absence, and the experience of depression brings that to the fore and helps us to think through whatever it means for absence to be part of our spirituality.

F&L: In the book, you write about why careful usage of language is so important when talking about mental health. Can you share some of the common ways that churches might talk about mental health and how to improve that language?

The way that language shapes our understanding of the person before us first came to my notice in my previous work on dementia. People would talk about the person no longer being there or how he or she would never do that, and so they constructed a person that was effectively dead by the way they spoke about that person.

But the person is far from dead. There are a lot of positive things to be lived even in the midst of that situation.

That’s exactly the same thing I discovered in mental health. Because mental health diagnoses, as important as they are — they’re sticky labels. Once you have one, it defines the whole of who you are.

If you have influenza, you don’t become the flu. But if you have schizophrenia, you become it, so the label becomes part of who you are. Then you create a form of stigma that’s really dangerous, because if you don’t see the person as a person, it doesn’t really matter to you what happens to him or her. The way in which you talk about somebody has profound social, political and spiritual effects, or side effects, in that sense.

The beginning point for good mental health care is to speak properly and honestly about people as people. The job of church communities is to be with people. And if we do think about diagnoses, it’s only to help us to know and understand this unique individual even more fully than we already do.

Minding our language, I think, is profoundly important. And once you begin to do that, once you’re self-consciously watching your language, you’ll actually begin to see that you can relate with people in general much more effectively than you would in any other circumstance.

That’s not just with mental health. That’s the way we talk about everything and every mode of perceived difference.

F&L: What are some ways to help people with mental health issues be part of a faithful community?

JS: In order to worship well, you have to feel safe, and I think people with mental health issues don’t feel safe within certain church communities.

For example, worship that constantly emphasizes happiness and joy can be profoundly difficult for people who just don’t experience that. If you have enduring depression and all your church ever talks about is happiness and how you should be happy, then you’re going to find yourself either faking your spirituality or simply feeling miserable.

Creating liturgical structures that include the full breadth of human experience is really, really important. And that includes lament.

I went to a church in Vancouver a year or two ago, and we were talking about mental health. And one of the things that this church did was have a preaching team that would give feedback on the sermon before it was preached. It struck me that if you let somebody in that group who lived with a mental health challenge, then you could really begin to think about constructing preaching that is aware of mental health issues.

That kind of innovative way of thinking and raising your consciousness so that you’re intentionally thinking about these issues is a beginning point for constructive and creative change, I think.

F&L: How can pastors be cognizant of mental health issues right now? Are there specific strategies that they should be using?

In a good pastoral situation, a pastor should know which people are particularly vulnerable at this moment in time. The pandemic means that a lot of us spend a lot of time just on Zoom like this, and there’s nowhere to get rid of your anxiety.

One thing that strikes me about these modes of communication is that on one level, it’s good, because I can speak to you on the other side of the world. But as soon as I switch this computer off, I’m on my own here, and that’s really difficult.

I think pastors need to think about that question. What happens when the computer screen goes off? How do you keep in contact with people when they are just suddenly plunged into silence in the way that we all have experienced, in that sense, which is deeply anxiety provoking?

It’s about creativity and imagination and recognizing what people are going through. I suspect that ministers and pastors will know that, because they’re going through it themselves.