Pauli Murray lived between and ahead 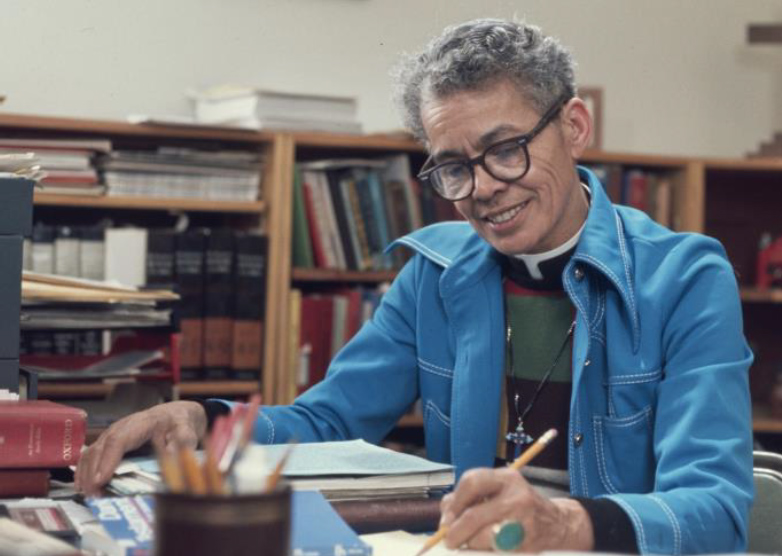 A new documentary focuses on the attorney, activist, poet and priest whose life’s work continues to influence battles for justice.

The Rev. Pauli Murray may be among the 20th century’s most influential voices for justice, yet one whose name isn’t familiar to many Americans. Murray’s work, spanning issues like gender, race and workers’ rights, influenced contemporary and future leaders, including Eleanor Roosevelt, Thurgood Marshall and Ruth Bader Ginsburg.

In addition, history records Murray as the first Black woman ordained a priest in the Episcopal Church, although Murray would now be considered gender nonconforming.

“We owe so much to her courage, to her willingness to speak out when society was not prepared to listen,” Ginsburg said of Murray in 2017.

They spoke in September with Faith & Leadership’s Aleta Payne. The following is an edited transcript.

Faith & Leadership: What led you to make this movie?

We knew that while we were making [“RBG”], but afterward, we thought, “Let’s find out more about this person.”

F&L: What were the challenges in presenting a fully formed three-dimensional person who wasn’t in most history books? You all were having to do your own research on a lot of this.

Julie Cohen: I think our idea going into this project was we wanted as much as possible to make the viewer feel that they’re hearing Pauli’s thoughts in Pauli’s own words. While it was challenging, because this is such a complex and multifaceted life, the task was made less formidable — and I would even say the task was made possible — by Pauli’s own work, because Pauli had not only put together material kind of spelling out this amazing life story but had made sure that it was preserved.

Every time that somebody came to do an oral history or a journalistic interview with Pauli, Pauli would just get a tape recorder and run tape also and save the tape. Many of these were ultimately stored at the Schlesinger Library at Harvard, where Pauli’s archives are kept, and the letters and the papers and even the poetry, which helped tie together so many different ideas and emotions that were fundamental to what Pauli did and who Pauli was.

The material was there, and the challenge was just how best to put it together to an audience, some of whom know quite a bit about Pauli but many of whom are completely unfamiliar with this important historical figure.

F&L: What did you have to leave out?

BW: This is by no means the definitive biography of Pauli Murray. There were chapters in Pauli’s life that we had to leave out, because it just wasn’t possible to cover everything — including the fact that Pauli was [named] an Episcopal saint. We did, of course, talk about Pauli’s ordination and turn to spirituality, but there were just some aspects, some things that we cut out.

Pauli, in the early 1950s, had been commissioned to write what was supposed to be a pamphlet of laws involving racial discrimination or race-based laws. It wound up being a huge tome, which Thurgood Marshall referred to as sort of “the bible” of race-based laws, which he used for research.

Pauli was involved in a pretty well-known death penalty case, in which Eleanor Roosevelt was campaigning with her, to spare the life of someone wrongly accused. It’s sort of on and on. We couldn’t do everything. What we did do was to highlight those major areas in which Pauli was just so far ahead of the time.

F&L: The biographer Rosalind Rosenberg speaks about Pauli’s in-betweenness and how that drives so much of what we see of Pauli’s life and work. Could you speak to that?

JC: Rosalind Rosenberg made the very thoughtful point that the in-betweenness that Pauli felt from lived experience, both in between races and, in a sense, in between genders, was really fundamental to Pauli’s innovative legal and political thinking, and we agreed.

We very much agree with professor Rosenberg on that point, and because you’re raising that, I do think that the last question that you were asking about research that we did, our research very much follows on work that’s been done by authors and scholars including Rosalind Rosenberg, including Patricia Bell-Scott, who wrote “The Firebrand and the First Lady” and was our consulting producer on this film, and also including Brittney Cooper, who wrote a chapter about Pauli Murray and has been lecturing on Pauli for a long time at Rutgers University.

There’s been, in academic circles particularly, a fair amount of really eye-opening and fantastic research on Pauli Murray, and we were sort of following along with that and bringing the story into documentary form.

F&L: Throughout the movie, you all make the point that Pauli was ahead of Pauli’s time. Could you explain that?

BW: The reason that Pauli was ahead of the time, I think, is that Pauli was such an innovative and creative thinker, someone who didn’t just go along with the accepted wisdom but questioned things that people took for granted, like Plessy v. Ferguson, the idea of separate but equal, being the kind of legal basis on which you had to approach discrimination. Pauli said, “That’s ridiculous. Separate but equal is by definition just wrong. It can’t be equal if it’s separate.”

Ten years later, in Brown v. Board of Education, Pauli’s thinking was used, and Pauli was right. Similarly with the fight for women’s equality, for decades, women had been trying to get an equal rights amendment, and in the mid-1960s, Pauli was one of the first people to say, “Hey, wait a minute. We can fight about the Equal Rights Amendment, and that would be really great, but it’s going to be difficult to accomplish. How about our own Constitution? How about the 14th Amendment, the way we use the 14th Amendment to win legal equality for African Americans? Let’s see if we can’t use that for women.”

These were really radical ideas, and I think in the moment today, we could use some innovative, groundbreaking thinking about how to approach some of the retrenchment that’s going on in voting rights or reproductive rights or other areas where a Pauli Murray [way of] thinking could be very helpful.

F&L: Kelly Brown Douglas is among those who speak to ordination coming late in life for Pauli, but when you look at the totality of Pauli’s life, faith runs throughout it, both because of the family heritage and also in the causes Pauli took on. You chose to include video of Pauli preaching in Chapel Hill, North Carolina. I’m wondering how you perhaps saw faith reflected pre-ordination for Pauli Murray.

JC: Faith, the Episcopal Church and spirituality more generally were essential to who Pauli was throughout life. I think you can feel that when you look at Pauli’s poetry, and even in a sense Pauli’s form of activism and sort of always trying to keep in mind very Christian-informed beliefs as a guiding principle. Pauli said quite clearly in some interviews that Martin Luther King’s feelings about religion and spirituality very much informed Pauli’s thinking on those matters, particularly how it applied to racial reconciliation.

We were so thrilled that we were able to find and use the Chapel of the Cross piece, a bit of video that had been taken in the late 1970s after Pauli was ordained an Episcopal priest, because it feels like it really shows the opening and the joy that spirituality and religion gave to Pauli.

Pauli’s grandniece said in the film that the “new Pauli,” in the era when Pauli is an Episcopal priest, suddenly is a listener, not just a talker, and is really, through the church, mentoring people and finding just the expansiveness and joy that faith at its best can bring. Pauli’s life and Pauli’s kind of long path is a great example of that.

F&L: In this moment, there are activists committed to some of the same issues that Pauli championed who are feeling battered and worn down. From your deeper understanding now of Pauli’s life, what words would you offer or what examples might you point to that might resonate or be helpful to them?

BW: I don’t want to be presumptuous about the struggles that people are facing today, but I would say that when you look at Pauli Murray’s life and the challenges that Pauli faced — in social justice movements, personal challenges with being a nonbinary person, defeat that Pauli suffered for causes that Pauli truly believed in and yet kept on going — [you find] a kind of determination that from our perspective was astonishing.

In the Schlesinger Library but [not] in the Pauli Murray collection, we stumbled on the video that had not been digitized before of an interview that Pauli did after becoming a priest, when there was more interest in Pauli’s story because people were coming to do interviews.

We were so struck by the positivity and the poise that Pauli had in the face of everything, and ultimately in the face of suffering a fatal disease. That determination is really important. This is a person who just had so much determination to accomplish what they could in the time they were given on earth that I find it inspiring.

F&L: Is there anything I haven’t asked?

JC: In Pauli’s life and story, there’s so much to cover, and there are so many different ways that one could come at it. One thing we always like to talk about when we’re hitting the various elements of Pauli’s life, because we know this was so important to Pauli, is the writing.

Pauli’s family history, “Proud Shoes,” autobiography, “Song in a Weary Throat,” and a poetry collection, “Dark Testament,” among some other writings, are so deeply moving and so profoundly relevant today that I think we would send anyone that’s looking to dive deeper into Pauli’s story into Pauli’s own writings to have an understanding.

The poetry not only has actual and historical implications but is really evocative and very spiritual. I think people of faith would find a lot to connect with in a global and big way.

BW: I think highlighting the writing is important. For us, Pauli’s poetry became something that we returned to over and over in the course of putting the film together.

I don’t think that when we first set out we thought that we would be using a lot of poems, because there was so much else to talk about in Pauli’s life. But they’re so meaningful and really helped us frame the various aspects of Pauli’s life and give the audience a chance to contemplate and think about Pauli’s experience in a more poetic way.