We are physical beings — what if our ministries reflected that? 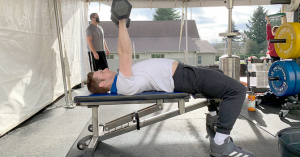 Riley Singleton, a volunteer assistant strength-training coach, lifts weights in one of the temporary outdoor shelters created so that teen participants can keep training during the pandemic. Photo courtesy of Matt Overton

Physical labor and activity have been a boon to teens during the pandemic, leading a youth pastor to realize that the physical matters -- to us and to God.

The text came in at midday on a Thursday. It was a parent writing in ALL CAPS. Ordinarily, this would worry me. But this text was different.

It was a mother thanking me because our ministry had managed to string together a few paid jobs for her teenage daughter. Just before Christmas, her daughter had reached out, looking to make some Christmas money. With some work and the generosity of some of our customers, her Christmas wish had come true.

But it was her mother who felt the gift most acutely, and she wanted us to know. She saw more benefits from the experience than just the money her daughter had earned. She sensed her child’s confidence growing, and she saw signs that physical labor was improving her daughter’s health and mood.

This is not uncommon in the ministry we do. My church is home to several entrepreneurial ministries, including a teen landscaping company and a strength-training program.

During the pandemic, we have had to temporarily shut down both enterprises; we’ve lost employees, suspended shared meals and had to rebuild the whole weight facility outdoors -- twice. But it’s been worth it.

Students often say that participating in the weights program and the landscaping work is the highlight of their week. For many, it’s the one chance in the week to feel normal. For others, it makes the difference between a depressive day and a decent one.

At every turn, we have discovered the accidental blessings of these two ministries. Because they involve physical activity and enable students to have distanced interaction outdoors with one another and with adults, they have been of immense benefit to everyone involved.

And through all of those dynamic signs of the kingdom, I have sensed a deeper theological truth that COVID-19 is teaching us: the physical matters.

Over the past year, we have certainly been reminded of our mortality. COVID has demonstrated the transience of life on this side of the kingdom of God. And sadly, it has also demonstrated the devaluation of life in our society.

Every day, people are confronted with the fact that we cannot greet or hug or grieve in physical ways that would ordinarily serve as a kind of spark or salve. So much communal connection usually happens through corporeal means.

For several centuries, Protestantism has been accused of being lost in ideas. Artists and mystics have rightly accused Protestants of practicing a kind of disembodied form of Christianity. Many times, we try to think our way to faith rather than feeling it or even enacting it.

The irony of this mental trap is that we serve the Christ whose entire entrepreneurial expedition into the world was filled with physical risk. It was tangible. And while the accusations about our cerebral tendencies made sense to me previously, it took a COVID Christmas and a student work project to make me see how much the corporeal matters -- to God and to us. Even our liturgy -- stiff though it can be at times -- has a physicality. And without it, we can feel disconnected.

As we approach Lent, Good Friday and Easter, this point is being driven home again. God doesn’t intend to discard his creatures or their physicality. God intends to magnify that creaturely nature in the resurrection of the body.

Resurrected spiritual bodies are still bodies, after all!

And indeed, every bit of creation matters to God. If Scripture is to be believed, God intends to redeem every last particle. If the physical matters to God, it ought to matter to us.

I think part of what inspired the text I received from that ecstatic mother was the encounter with an intuitive theological truth that physical creatures need physicality. Christ does not redeem humanity through disembodied truth or celestial empathetic “feels” beamed from on high.

Rather, the God we serve was willing to be accommodated in the human bodies of a Jewish child and a Jewish teen mom. God does not just feel passionately toward humanity. Rather, God “passions” for humanity in the form of bodily suffering.

People keep talking about the need to realize that there will never be a “return to normal” in the church after COVID. I think that might be true.

Perhaps in this time of physical denial, we should design ministries that tap into this aspect of our shared story. My ministry accidentally (or providentially) mimics the labor of a Christ who both labored in this world and was labored into the world in the most human of ways.

What if we began to frame ministries that more intentionally engaged our physicality? Could such embodied ministries rekindle the connections that feel so distant during this time? Could more-physical ministries participate more fully in Christ’s redemption of the physical and foster greater community?

Matt Overton is the associate pastor for youth and family ministry at Columbia Presbyterian Church in Vancouver, Washington. He has been doing youth ministry in various forms for the past 17 years, and is also the owner of Mowtown Teen Lawn Care and the executive director for The Columbia Future Forge. To learn more about the work Overton is doing, visit www.youthministryinnovators.com.